Emagine IT is recognized for its ongoing support of the Bureau of Alcohol, Tobacco, Firearms, and Explosives (ATF) Unified Financial Management System (UFMS) application operated at the Department of Justice (DOJ). Between 2007 and 2010, prior to migration to UFMS to DOJ, the Emagine IT Enterprise Standard Architecture III (ESAIII) Operations team, consisting of Unix Administrators and Oracle Database Administrators (DBA), performed countless operations in support of CGI, the developer and system integrator of Momentum (FReD) application at ATF. The bulk of Emagine IT’s support involved managing the WebLogic/Tuxedo/WebMethods servers, performing application deployments for major/minor releases, and routine Structured Query Language (SQL) scripts for maintenance by the DBAs. Emagine IT utilized Serena Dimensions to manage all these configuration changes as part of the Systems Development Life Cycle (SDLC).

Make a difference in your career and community. 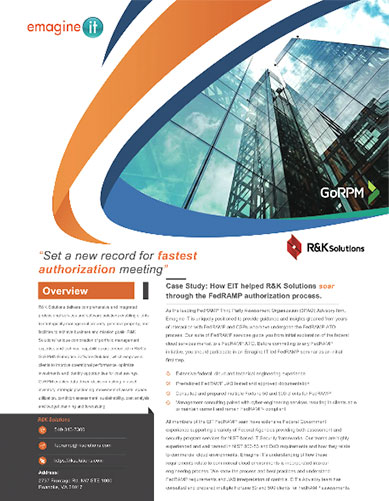 Case Study FedRAMP Meetings in Record Time R&K Solutions was able to put a FedRAMP-compliant platform along with all required documentation in less than half the time normally required.

Learn more about our approach.

Connect With an Expert